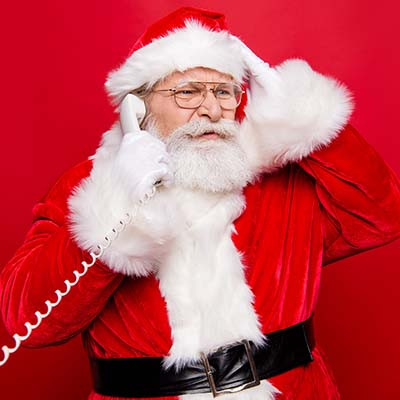 When the North Pole Needs IT Support, We’re Their First Call We work with a lot of businesses, but one in particular may surprise you. Let’s talk about how our services made a certain organization’s critical processes a lot easier to manage during their busiest time of year:

Jangle leaned back from his monitor and sighed, rubbing his eyes—half out of tiredness, half out of stress. As much as he loved this time of year (as an elf, it was only natural that he would) there were parts that he could admit he hated. The newly-transferred co-manager turned to the other manager of the North Pole’s IT department, Ginger.

Ginger glanced over at his screen. He was amazed that she could see at all, with all the stream from her perpetually full cup of cocoa fogging up her glasses. Her brow furrowed, telling him she knew exactly what he was talking about.

“Yeah, that doesn’t make sense.” She frowned and glanced back at her own monitor, stirring her mug with a candy cane as she examined the data it displayed.

Sighing again, Jangle leaned forward to examine the information once more for himself. Before him was a rundown of all the other departments at the North Pole—List Management, Toy Assembly, Coal Acquisition, Elven Resources, Packaging and Processing, and of course, the Garage—and all of the technologies that each department currently had in place, accompanied by the name of the elf signed in to use each workstation. Looking again, he confirmed that he had seen what he thought he saw.

During their time as co-managers of the North Pole’s newly-formed IT Department, Jangle and Ginger had not only trained a hand-picked team of elves to staff their department, they had made it a point to implement technology systems that would help to make their job much easier. One of these systems was a remote monitoring and management system, which allowed their team to keep track of all the Pole’s various tools and technology solutions and preemptively catch issues. It was this system that was causing him so much confusion at the moment. According to his system, there was an elf in two places at once.

It seemed that one of the elves assigned to the Coal Acquisition team was also working in Packaging and Processing… literally, his display was telling him that Jolly Cookiescarf was currently using his laptop in the mining office, while also logged in on a tablet in ribbons and bows.

Sighing once again, Jangle called over one of the elves in his department. Trinket Cracklecane locked her workstation and wheeled her chair over.

Jangle looked at his enthusiastic team member. “Have you seen any sign of a virus in our systems? I have an elf that appears to be logged in on multiple devices simultaneously.”

Trinket’s face scrunched up in confusion. “No, I don’t think so. Let me check again, and I’ll call up USA Computer Services to ask if they can see anything.”

The Pole had been working with USA Computer Services since the year before, bringing on the managed service provider as an extra IT resource to work with their newly-formed internal IT team. The remote monitoring and management services that the MSP had provided had prevented a large number of issues from materializing, caught early enough to be fixed preventatively.

Trinket clacked away at her keyboard for a moment, and after a quick scan of her display, turned back to her managers.

“No sign of a virus, but I’ll call up USA Computer Services and see if they have any insight into what’s going on.”

As Trinket picked up her phone—connected via the North Pole’s new VoIP (Voice over Icicle Protocol) setup—Jangle and Ginger looked at each other. Ginger spoke up first.

“So, assuming it isn’t a glitch, what do you think is going on?”

Jangle rubbed his temples. While this wasn’t a huge issue, per se, he had learned from experience that these kinds of things could (and usually did) escalate into much larger problems if they weren’t addressed quickly.

“Honestly, it could be a couple things. I mean, there’s the obvious answer, that someone is sharing their login credentials with someone else… but that doesn’t make sense, because we’ve made sure that each elf has access to the tools they need. I mean, something could be misconfigured on our end, too.”

Click. Trinket placed her handset back in its cradle.

“Well, I talked to USA Computer Services. Based on what they can see, we have an active user logged in at two places at once. They’re going to kick both users out and push a password reset.”

“Okay,” Jangle replied. “So with that taken care of, it sounds like we need to track down Jolly and find out who he shared his credentials with, and then make sure he doesn’t do it again.”

Ginger nodded, and the two started off. Descending into the mines, Jangle and Ginger expertly navigated the candy cane catwalks that led to the control center that ensured that the Pole had the coal needed for distribution each year. Walking in, they saw Jolly sitting at his workstation, updating the calculations of how much coal the Pole would need for the big day.

“Hi, Jolly, can we talk for a second?” Ginger asked politely.

Jolly started, clearly not expecting company, and pulled off his headphones. Loud carols could be heard emanating from the speakers. “Yeah, is something wrong? I just got a prompt to reset my password.”

“Well Jolly, we noticed that you were logged in at more than one place, and we just wanted to check and see if you had shared your passwords with anybody.”

Jolly nodded. “Yeah, Biscotti had forgotten his, so I figured it would be easier if he and I just shared. My account also has access to everything he needs, so it just made sense to share it, instead of bothering you guys.”

“Well, we appreciate that, Jolly,” Jangle said. “However, it’s important that you don’t share your access credentials. I mean, I know that Biscotti probably wouldn’t do anything bad with them, but you can never be too careful, you know? I mean, what if somebody called him up, pretending to be with the Tooth Fairy or someone, but they were just trying to ruin Christmas? They could easily phish your credentials out of him, and you’d be on the hook too.”

“Oh! I never thought about it that way. Makes sense, I suppose. Sorry about that!”

Ginger nodded. “That’s okay, just as long as you don’t do it again. Maybe we should remind the team here about the importance of password security once things calm down a little bit.” She looked to Jangle to see if he agreed. He did.

“I’ll reach out to USA Computer Services to see if they have any suggestions. In the meantime, I don’t see the harm in sending out a quick email to everyone to reinforce proper password practices.”

Ginger nodded again in response, and the two co-managers returned to their team to strategize their internal security awareness improvements.

We can provide your business with the same services that we provide to our friends up north. Reach out at (704) 665-1619 to find out what we can do for you. Merry Christmas!